The European Marine Biology Symposium has been an annual event on the calendar of marine biologists since 1966. The EMBS has been hosted in 20 different European countries, some having been visited more than once. 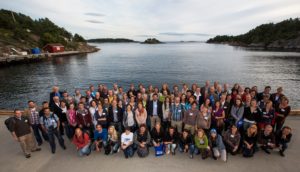 The history of the European Marine Biology Symposia dates back to 1960 when a series of German marine biological symposia was initiated by Otto Kinne, Director of the Biologische Anstalt Helgoland.
These Symposia attracted marine scientists from outside Germany and it was realized that European participation should be encouraged. In answers to a questionnaire sent out in 1965, 98% were in favour of a European Marine Biology Symposium being held at regular intervals; 65% were against affiliation to any existing international bodies. As a result the first European Marine Biology Symposium was held on Helgoland in early Autumn 1966 (see Kinne, 1967).
The meeting was such a success that Symposia under the name EMBS (European Marine Biology Symposium) have been held annually since 1966. To date they have been organized in 20 different European countries (overview), some having been visited more than once, attracting marine scientists not just from Europe but from all over the world now.
After 50 years, in 2015 and hosted by the Alfred Wegener Institute (AWI), the EMBS returned to its roots in Helgoland to celebrate its golden jubilee. As a preamble Herman Hummel, President of the EMBS in 2015, together with Matt Frost and Christiaan Hummel, have written a short introduction to history and traditions of the EMBS in the Marine Biologist (download pdf).

The hosting Institution is responsible for all details concerning topics for discussion at the Symposia and all aspects of organization. Usually, the chosen topics (theme sessions) reflect the expertise and interest of the hosting institution but are formulated in a way that they cover interest of a broad range of participants. Although this approach restricts the number of participants somewhat it allows for an efficient exchange of ideas and discussions while ensuring that the EMBS maintains its familial atmosphere with typically 150 to 300 participants.
In addition to the specific themes, the EMBS traditionally offers a general session covering any and all aspects of marine biology. This format has shown to be successful and appreciated over the decades, highlighting the research focus of different European institutions.
One of the facts that make the EMBS so popular is its focus on networking. There are usually no parallel sessions which ensures that everybody can listen to all presentations, fostering and encouraging the discussion among all participants, regardless if early career researcher or senior scientist. Emphasis is also put on the poster sessions, providing sufficient time for discussions at a friendly and informal atmosphere. The MARS network and the MBA are sponsoring poster prizes every year to encourage early career researchers and reward their outstanding work.

Organisation of the EMBS

At the first meeting in Helgoland an ad hoc Committee was organized consisting of a representative from each European country attending that meeting. Such a Committee meets during each year’s Symposium until today. The purpose of the Committee meeting is to ensure the informal nature of these Symposia and their successful continuity, and to give advice to inviting institutions when necessary. The committee usually also elects the President and discusses current issues and future strategies of the EMBS. The President holds office for 3 years and is supported by a Secretary. The late Harold Barnes of the Dunstaffnage Marine Laboratory, Scotland, was elected the first President. He was followed by presidents coming from France, Germany, Italy, Norway, Finland, Greece, the Netherlands, Austria, Wales and England.

Anyone interested in learning more about EMBS or hosting a future symposium should contact the current President: Professor Tasman Crowe, tasman.crowe@ucd.ie

Since 2014, conference proceedings of the EMBS are published as a special issue in the Journal of the Marine Biological Association (JMBA), thus enabling publication in a well-respected, long-established journal. 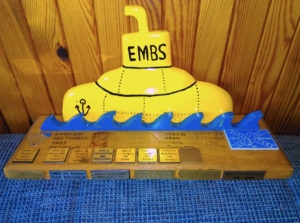 The unofficial heart and soul of the EMBS is the prestigious Yellow Submarine. At the very first EMBS, it was proposed to hold a light-hearted competition between the participating nations for some relaxation. But for what prize? It happened that during the summer of 1966 the Beatles had released an album containing the song ‘The Yellow Submarine’, which had rapidly gone to the top of the charts. When a few of the participants, including John Gray, saw a toy, plastic yellow submarine in a local shop window, they had the inspiration to buy it for the prize. So the tradition of the Yellow Submarine competition was born, which has enlivened every EMBS since then and became the legendary event of each years symposium (Ryland 2009. Mar. Ecol. 30: 200– 202). Today, the Yellow Submarine competition is an afternoon of fierce and at times bizarre competition of marine-related games or activities, where teams from participating countries compete for the precious trophy and the honour of winning it. This long-standing tradition is all about fun and having a good time (and winning the trophy of course!!!).