Regeneration is an important experimental model for understanding cellular and molecular mechanisms of animal development. Elucidation of emergence, evolution and diversity of the regeneration mechanisms requires its comparative studies in representatives of different phylogenetic groups of animals. In current project we study the regeneration in marine sponges (Porifera). Sponges are the most ancient extant multicellular animals. In adult stage these animals lack any organs, digestive, nervous and muscle systems. Aquiferous system is the only distinct structure in the body of adult sponge. Through this system sponges pump huge volumes of water obtaining oxygen and nutrition. High efficiency of water pumping in continuously changing hydrodynamic conditions is vital for sponges. These ancient animals found elegant solution for this problem—they permanently rearrange their aquiferous system to make it most effective in particular hydrodynamic conditions. Reversible differentiation of cells and their motility are at the basis for anatomical plasticity of sponges. Virtually all cells in the sponge body permanently move and many of them are capable for transdifferentiation (Harris, 1987; Bond, 1992; Ereskovsky, 2010). The project is aimed at precise study of cellular and morphogenetic mechanisms of developmental process during the regeneration in sponge species from different phylogenetic groups and with different anatomical organization. 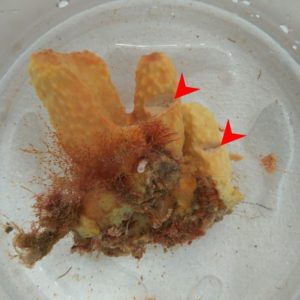 The demosponge Aplysina cavernicola after a surgical operation. The wounds are marked with the red arrowheads. © A. Lavrov

During the work at Station Marine d’Endoume we studied the regeneration in verongid demosponge Aplysina cavernicola with special emphasis on the cell proliferation during this process. The sponges were collected by SCUBA diving in the environs of the station and kept in running seawater aquariums prior the experiments. During the experiments, a portion of apical ectosome (superficial part of the sponge) was removed, along with a directly underlying section of the aquiferous system (choanocyte chambers and canals). The depth of excision varied slightly between the operations, from 500 to 1000 µm.
The wound healing in the A. cavernicola ends after only 72 hours post operation (hpo). By this time the normal tissue structure is restored in the wound area, leaving only depression in the sponge body.
The 5-Ethynyl-2′-deoxyuridine (EdU, Life Technologies, USA), which incorporates in the nucleolar DNA during its synthesis in S-phase, was used as a label for the proliferating cells. In the first set of the experiments we developed the appropriate protocol for proliferating cell labelling in A. cavernicola. We found out that the 200 µM EdU concentration can be used for long incubation periods (24 hours) and 600 µM EdU concentration – for short incubation periods (6 hours). Labelling of the proliferating cells in the regenerating sponges were conducted during the following time periods: 0-6, 6-12, 0-24, 24-48 and 48-72 hpo.
The cell proliferation was observed at all stages of the regeneration. However, during the early stages of the process (prior 24 hpo) the proliferation was considerably decreased: only few cells divided in the wound area. During the following regeneration the number of proliferating cells was gradually increasing and reached the intact tissue level at the period 48-72 hpo. This data coincides with results of cell proliferation studies during regeneration in Halisarca caerulea (Alexander et al., 2015) and Halisarca dujardinii (Borisenko et al., 2015).